The origins of our orchard go back to the early 1930’s.  At that time, about 15 years after Henry Francis du Pont had assumed management from his father, the total acreage of Winterthur Farm had grown to well over 2000.  One record has it that 70 workers and their families made up a population of over 200 people living on the farm.  It had a railroad station, a post office, a sundry shop and an elementary school.

In 1932, possibly triggered by a ‘self-sufficiency’ frame of mind that was common during the great depression, Mr. du Pont asked that a fruit orchard be designed to go along with a vegetable garden that was located where the North Course 6th fairway is today that had grown to 5 ½ acres.  Mr. E. J. Humphries, his Farm Superintendent, produced a very extensive plan to satisfy his request.

The result was not your everyday orchard!  In all, it covered 23 acres.  Mr. Humphries included 108 apple trees (22 species), 108 peach trees (10 species), and a number of pear, plum, cherry, nectarine and peacharine trees.  The pear, plum and other miscellaneous trees were in four rows about 30 feet apart starting near the front of the North Course 9th tee and running roughly parallel to the fence toward the green.  The apple and peach trees were in another 9 rows covering our present entrance road.  He also planted two rows of grapes – eating as opposed to wine varieties – along the fence.

It is important to note that the orchard and the vegetable garden were not commercial ventures.  Nearly all of the harvest went to feed Mr. du Pont’s family and the Winterthur employees and their families.  A publication, the Winterthur Reporter, from the fall of 1984 says that, during the summer and fall months, four full-time employees were engaged in canning and freezing the harvest.  A processor in West Chester made cider and apples that could not be eaten immediately were taken to a cold storage facility in Chester County.  Two men were employed year round to prune and spray the orchard and to pick and sort the fruit in the fall.

The entire orchard was part of the 335.056 acres that became the Wilmington Country Club in 1952.  A condition of the sale was that the Winterthur staff would maintain the orchard and the vegetable garden and the products would belong to Winterthur until Mr. du Pont’s death.  Members who have been in the club for more than 35 years may remember that, until 1969, the entrance road made 90 degree turns to go around the trees rather than go diagonally through the orchard as it does now.

The orchard today is quite different and we can point to some factors to explain how we got from then to now.

• First the life expectancy of cherry, plum, nectarine and peacharine trees is much shorter than that of apples and pears – they are all gone.

• The grape arbor was probably removed when the line between the properties was defined in 1952.

• All of the original peach trees were removed as they deteriorated with age.

• Many trees of all kinds were removed to build the 9th hole.

• Other apple trees came down to reroute the entrance road after Mr. du Pont’s death in 1969.

• Finally, apple trees have a long, but finite, life expectancy and today only 3 of the trees planted in 1932 remain.

Key to today’s array is that, in 1997, after some years of indifference, a modest program of pruning and spraying was started.  Improvements came quickly and in 1998 a decision was made to replace some of the lost trees.  Modern varieties were chosen and new trees were planted on the same ‘grid’ as the original orchard.  Dwarf trees were chosen for easier maintenance and new, hybrid species such as Gala, Fuji, Empire and Enterprise were added along with existing varieties such as Golden and Red Delicious and Cortland.  We have continued to replace lost trees and 4 varieties of peaches  have been restored along the fence.  Today, in total, there are about 70 apple trees and 25 peach and pear trees.

WCC members and employees are welcome to enjoy peaches in August and early September and apples from September through November.  As in the past, a map, identifying all the trees in relation to the cart path and other physical features, will be available near the handicap computer above the Pub.  Get a copy and have fun locating and picking your favorites.  Fruit that is judged ready to pick will be indicated by a green ribbon attached to the branches. 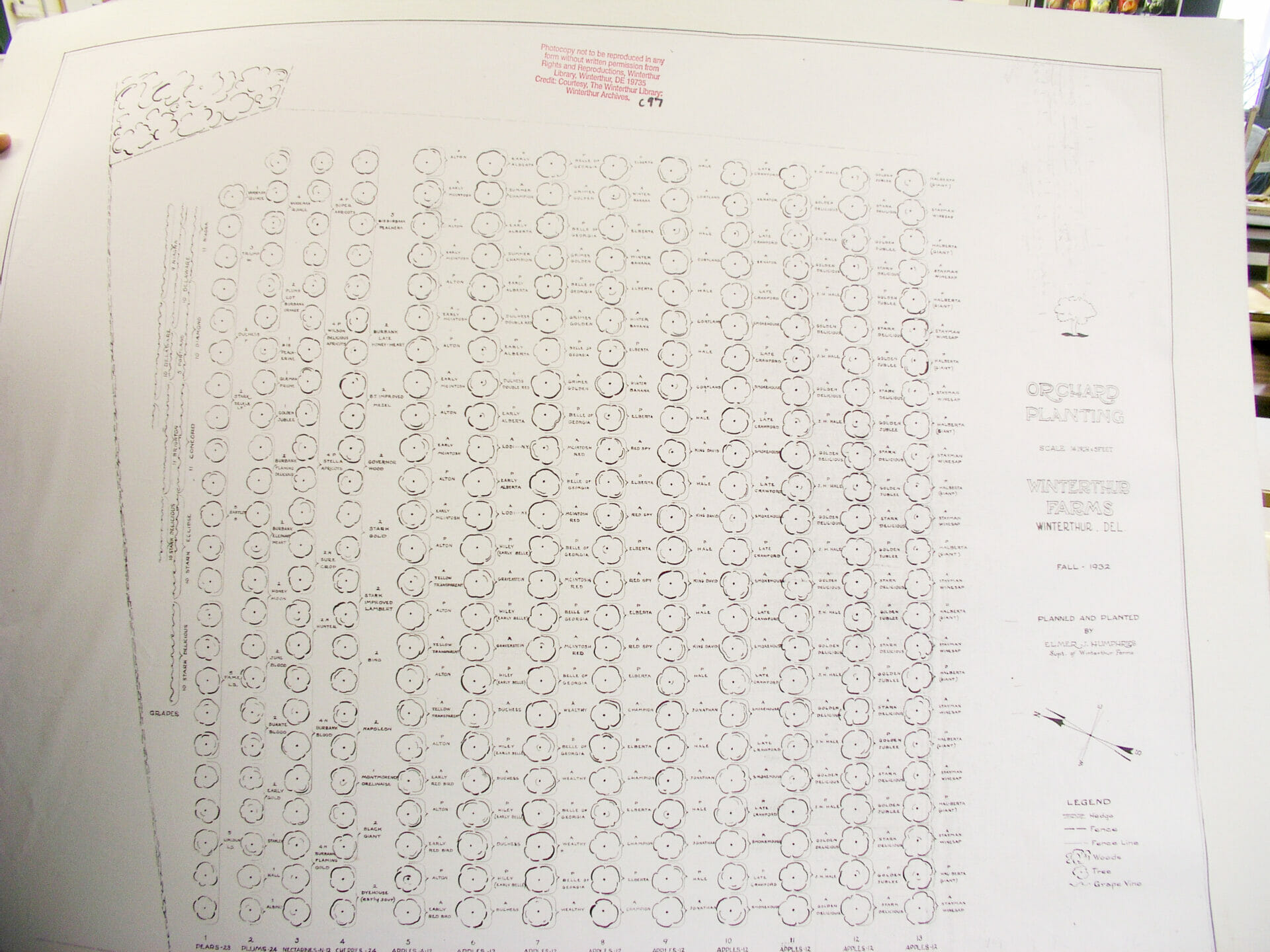