The History of Our Orchard

The beginning of our orchard goes back to the time when Henry Francis du Pont and his father, Algernon du Pont, were building what is known today as the Winterthur Estate. They had taken in nearby farms – the Martin farm where our grounds department is located today and the Clover Hill Farm where the homes of our General Manager and Grounds Superintendent are.  The estate had grown to about 2200 acres, extending all the way over the hill to the Brandywine.  Winterthur Farm was a community unto itself with family, employees and dependents in residence, adding up to about 220 people.  It had a railroad station, a post office and an elementary school. A sawmill, operating in the woods across the meadow from today’s 9th tee, was processing the timber from the property for building needs.

In 1932, Mr. du Pont decided that he needed an orchard and he commissioned his Superintendent, Elmer Humphries, to come up with a plan.

The result was not your everyday orchard. The planting plan, which is still available in the library at the museum, shows an impressive array of fruits and grapes. It called for 108 apple trees (22 varieties) on alternate rows with108 peach trees (10 varieties) and a number of plums, cherries, pears, apricots, nectarines and peacharines. It even had 10 vines each of 11 varieties of grapes planted on the north side of the fruit trees approximately where the split rail fence between the properties is today. References from the library point out that they were eating grapes not wine grapes.

It must have been a pleasure in the 40’s, 50’s and 60’s to browse the orchard and sample the rewards. Two men were employed, full time, to spray, prune and harvest the fruit. Cold storage and a cider press were located in the West Chester area. Ice trucks were used in the summer to transport the fruit from the orchard and vegetables from a 5 1/2 acre vegetable garden (located near the fairway bend on today’s 6th hole) to the family and their employees in the Hamptons.

When 335 acres of the farm were set aside to form the Wilmington Country Club in 1951, the orchard and the garden were on the grounds of the new club. The conditions of the sale, however, were that the orchard and the garden would be retained for the benefit of Mr. du Pont and his family. Our North Course was completed in 1962 with a routing that respected those conditions. Long time members will recall that the road made a right turn at the present location of the 9th tee followed by a left turn around the orchard to the club house.

Following the death of Henry Frances du Pont in 1969 we took full ownership of our property.  Soon two significant decisions by the Club affected the make-up of the orchard.  A diagonal road was cut through the trees to straighten the entrance road and the 9th hole of the North Course was added at its present location along the fence.  Saving the fruit trees was not a priority and the orchard was changed forever.  The vegetable garden was plowed up and planted to make way for the rerouted 6th hole according to the present design.

Going forward from 1969, the remaining orchard was maintained by our club as a necessity rather than an asset.  The squirrels, the deer and the worms enjoyed the fruit but there wasn’t much in it for the members. The life expectancy of peach trees is much shorter than that of apples and they were gone. The grape arbor was probably removed when the line between the properties was defined in 1952 and nearly all of the cherries, plums and apricots gave way to the construction of the 9th hole. The remaining apple trees were disappearing from age and storms when, in 1997, at the urging of one of our members, the Grounds Department undertook a program of pruning and spraying. At the time, 37 of the original trees had survived. A year later, a restoration program was started and 43 new trees were planted on the original grid of the orchard.  For ease of maintenance the replacement trees were on semi-dwarf root stock and new varieties were selected based on disease resistance and compatibility with the mid-Atlantic climate.

The rest, as they say is history. Under the supervision of our arborists, John McMillan, in 1998, and, currently, Peter Coates, the orchard has been sprayed and pruned to yield the treasure we have today. Unavoidably we have continued to lose the  old trees until today there are only three from the original planting. Before long there will be none.

But the orchard will survive.  We have continued to replace the fallen trees with new varieties and peaches and pears have been planted along the fence.  It is impeccably maintained for the benefit of our members and employees. A map, that is available in the club house during the harvesting season, is updated every year and ‘green ribbons’ are attached to the trees that, in the judgment of our arborist, are ready to pick.

So enjoy the bounty between now and November and give Peter a wave when you see him in the orchard in his little white truck to show your appreciation. 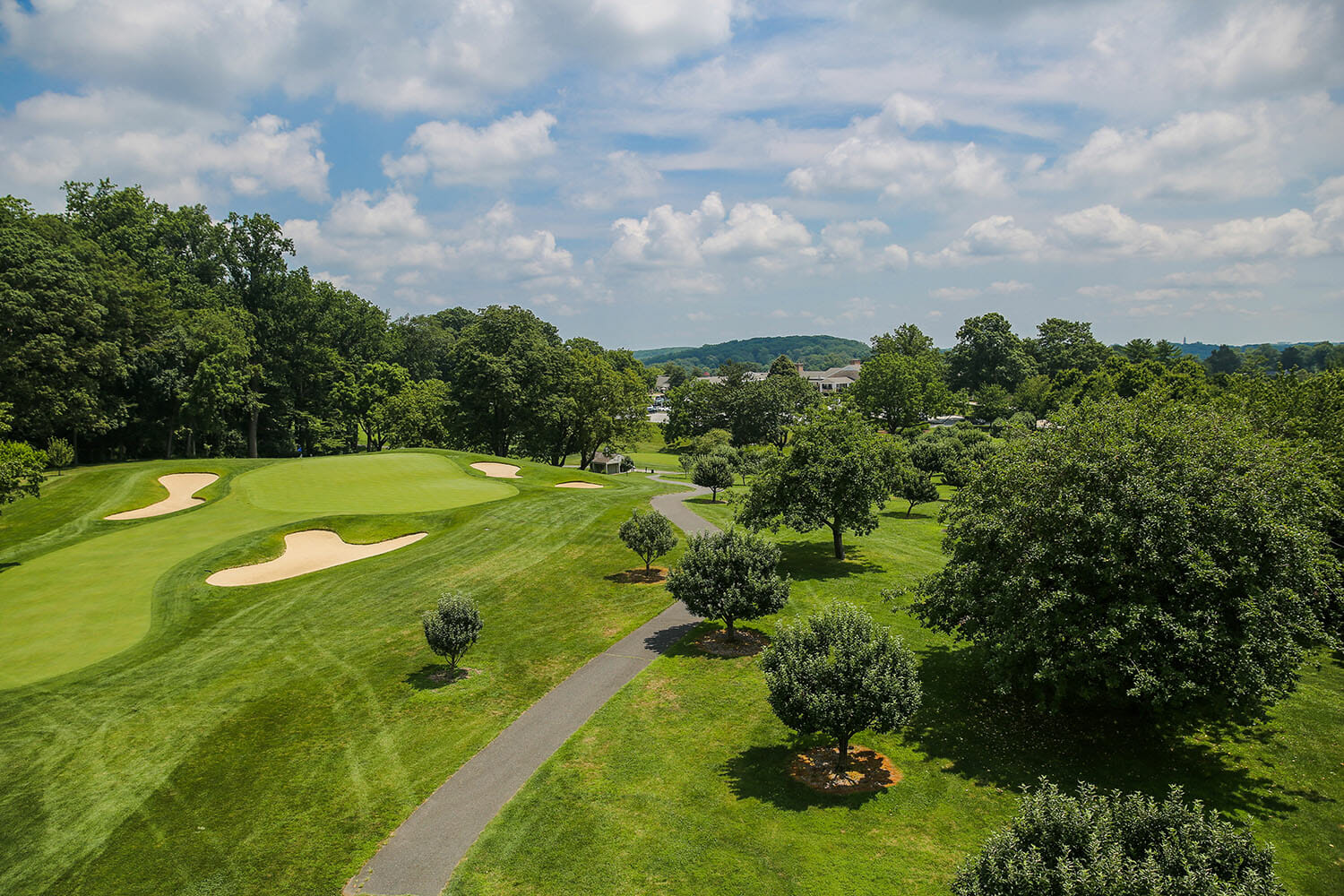 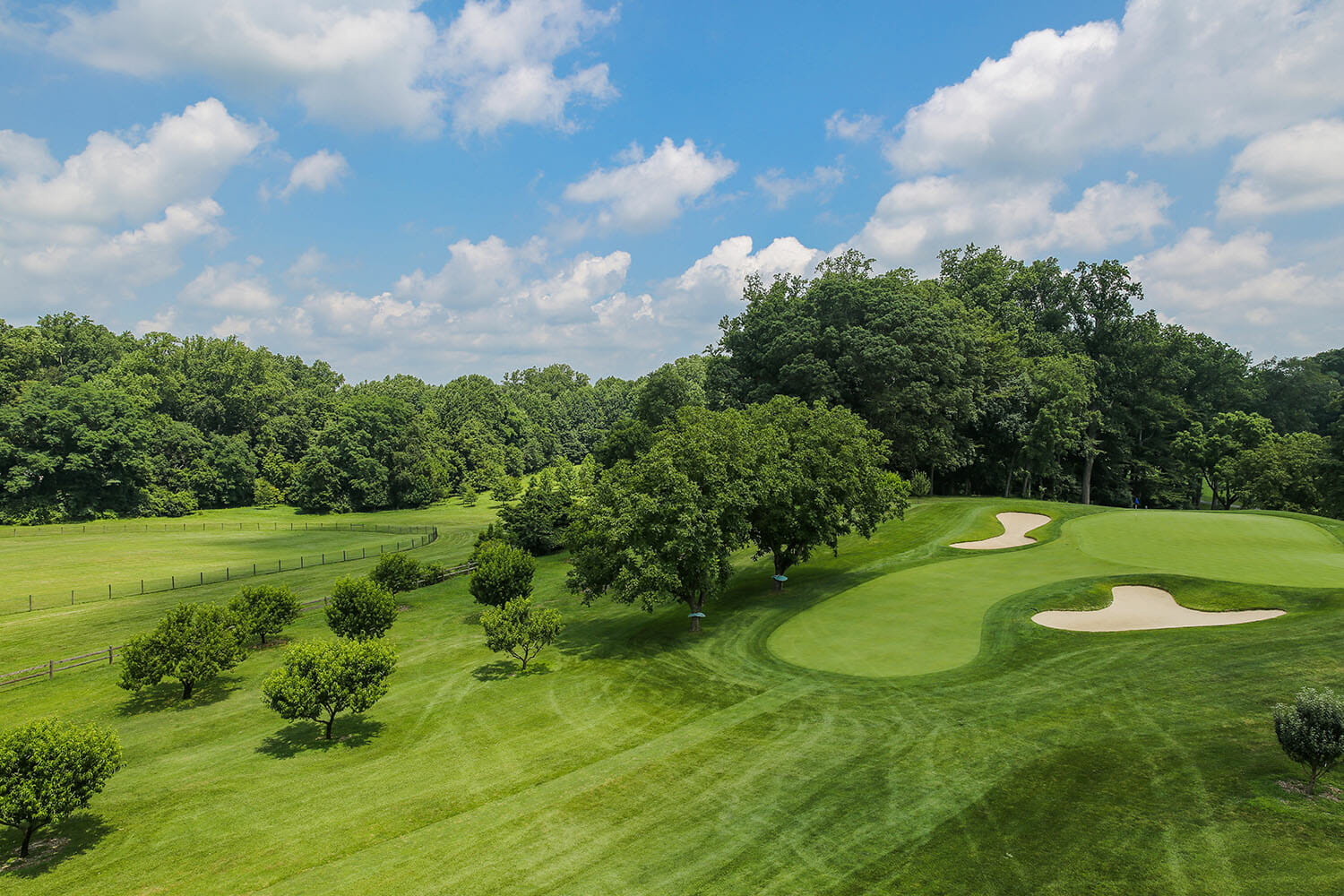 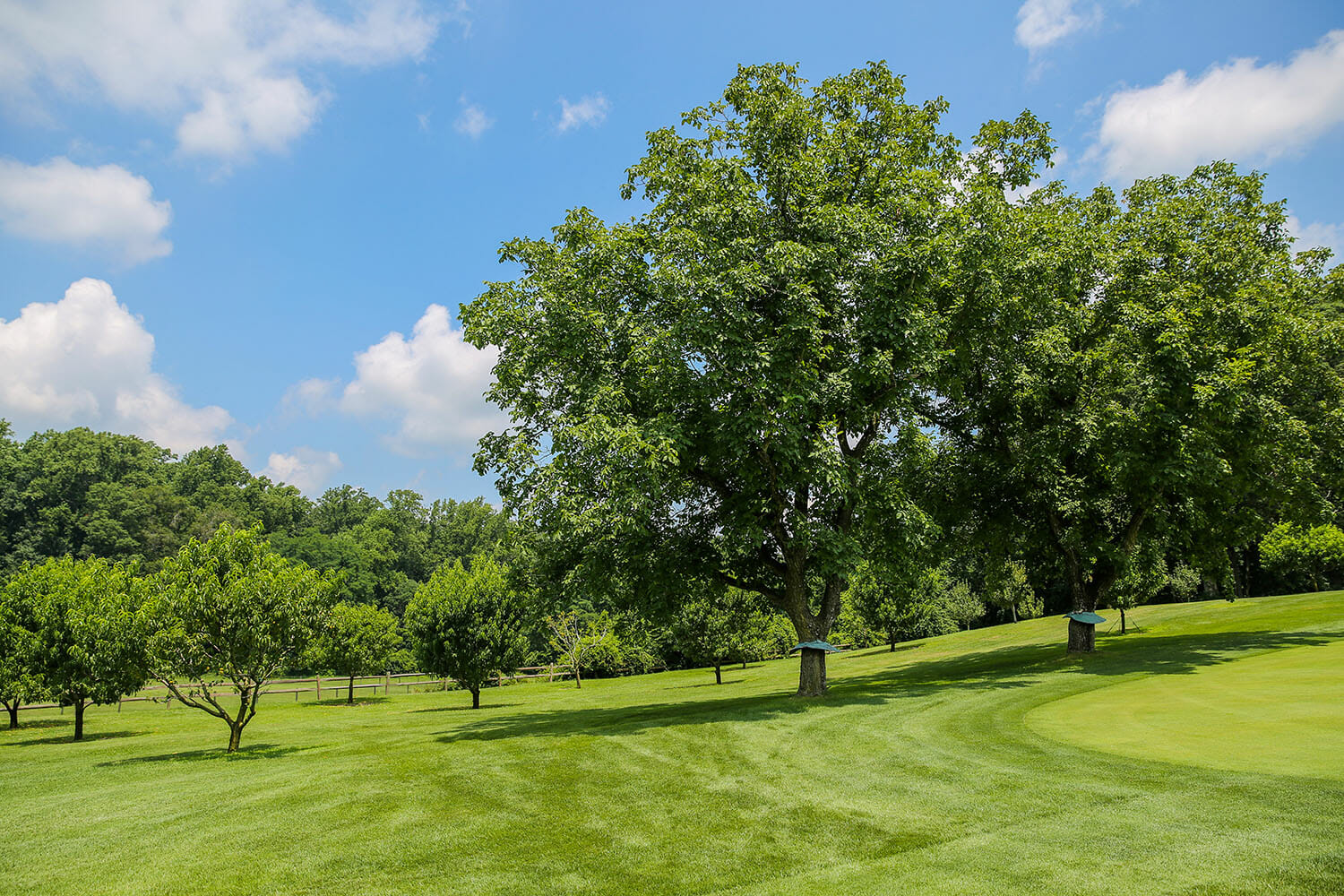 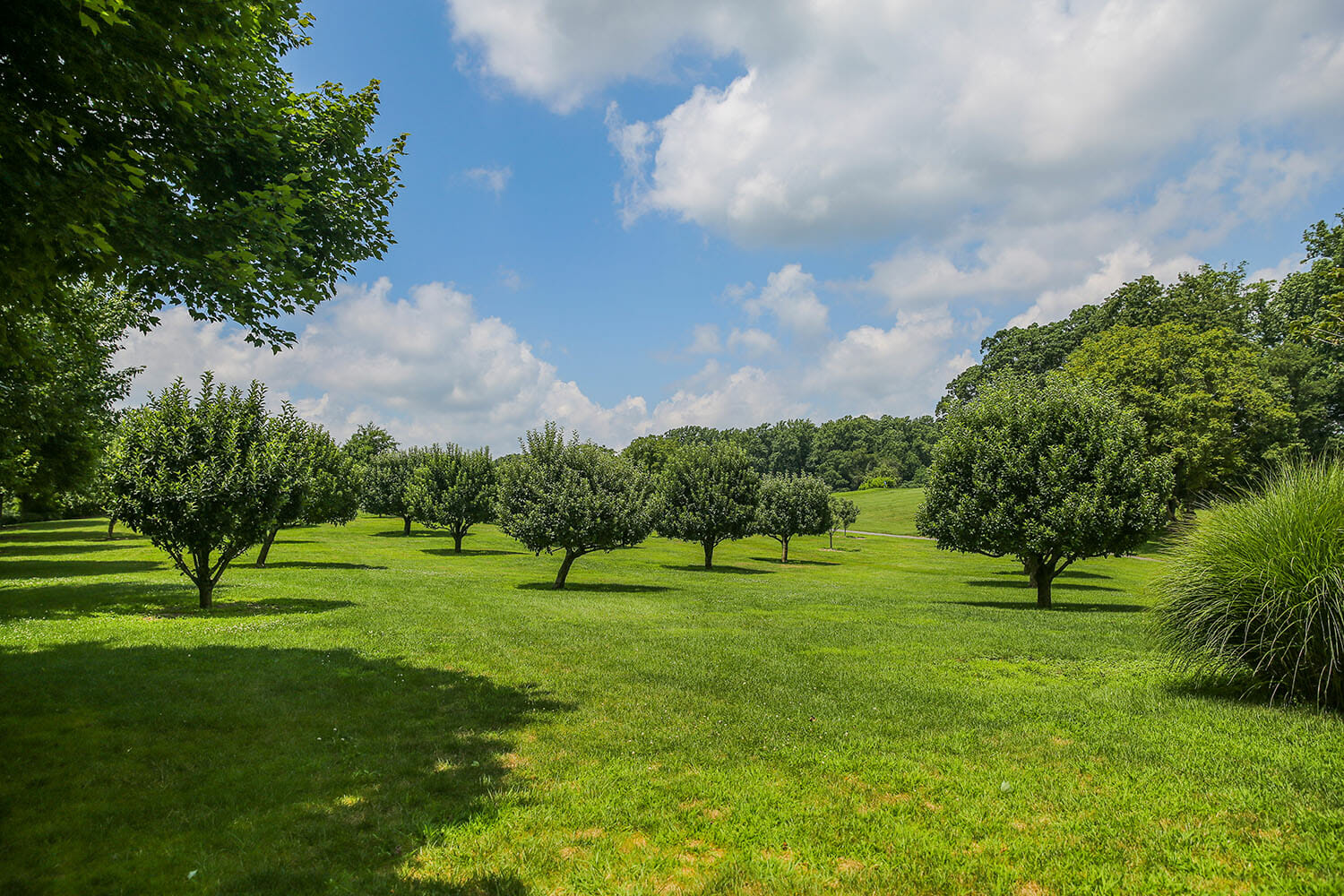