Due to fortunate weather this Spring the Grounds Department was able to initiate aerification much earlier than previous seasons.  With time on our side, greens aerification was completed thoroughly and a great deal of thatch was removed. Our “Early spring” has since returned to more typical if not colder weather as we begin our golf season.

On March 11th we began core aeration with 5/8″ inch tines at a 2″ spacing on all of the South greens. These cores were collected, disposed of, and the open holes were filled with a kiln dried sand. 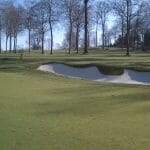 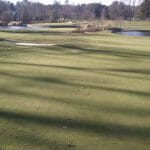 The following week, March 16th the Graden process began on the South greens which is the first time this process has been taken to the greens surface. The Graden is a machine which cuts 3mm wide channels in the green at a spacing of 2.5″ and fills the channel created with kiln dried sand. This process was completed in 2 directions for increased thatch removal and to help break up the visibility of the long lines that are a result of this process.

Spring aerification was completed on April 5th when sand was injected to a depth of 5″ utilizing dryject machines. Dryject is a process in which a blast of water is shot into the green at 3″ x 3″ spacing and the water flow pulls kiln dried sand behind it filling the void created. The greens at the practice facility received the same aerification as the South course leaving the club house putting green to be done the same time as North course aeration.

The various additional playing surfaces on the South course have also been aerified throughout the spring including solid tine aeration on fairways followed by sand topdressing. Core aeration of tees and approaches followed by the graden process in one direction. All courtesy walks and intermediates have been aerified and overseeded with rye grass seed. Finally, we have made progress on aerifying high traffic areas in the rough followed up by fertilization.