The ten day period of oppressively hot conditions in mid-July have resulted in injury to grass in almost all areas of the club grounds. Of greatest concern to many members is South fairways and naturally so because they have been so good up to now. “Burned out” is a comment that is being heard but this is a very misleading assessment of conditions and challenges we face.

Clearly, extreme heat is the most influential and immediate factor resulting most recent decline. Simply put, the vast majority of our grass populations perform best under more moderate climates. They can fail under severe heat, and struggle further if factors beyond just temperature compound stress. The most significant factor added to heat at this time is excessive moisture. Areas of turf that do not drain well are simply “wet wilting”, which we have faced before. Fairway areas in which we have been able to improve drainage are by and large not damaged. We intend to continue each year to add as much “sand-channel” drainage as time and resources allow.

The third factor that was instrumental in our decline was that of wheeled traffic over the areas of poor drainage. The wheeled traffic of most concern comes in two forms; golf carts, and mowing equipment, especially in the areas of fairways closest to rough where wheel pattern cannot be altered in the “clean-up” pass. The most effective way to have avoided a great deal of the damage would have been to stop mowing and restrict carts. Neither option seemed very plausible. During the hot period, we avoided mowing after 10:00 AM and have since changed the mower that is used for the cleanup cut.  This will alter the traffic pattern aiding in the recovery of damaged turf.

Recovery will take some time.  Most of the areas will bounce back as we start to encounter more favorable temperatures.  Some areas around the edges of fairways will require some seeding.  We will begin these processes this week.  As mentioned above we plan to continue with sand channel drainage during the off-season in order to correct some of our problem areas.  We are also seeking other mechanical means that would fracture the sub soil layer in fairways overall.   This would greatly improve the ability of water to move from the sand cap through the slow to drain layers below.  Below are a few pictures of the damage we have sustained during the heat wave.

Here are tire marks from a golf cart that made a sharp turn.

Number three South fairway was one of our fairways that was hit the hardest. Here is a picture during the week of intense heat and humidity. 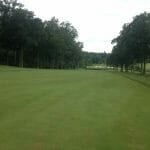 This is three South fairway less than a week after the most recent heat wave. As you can see the fairway has started to recover.