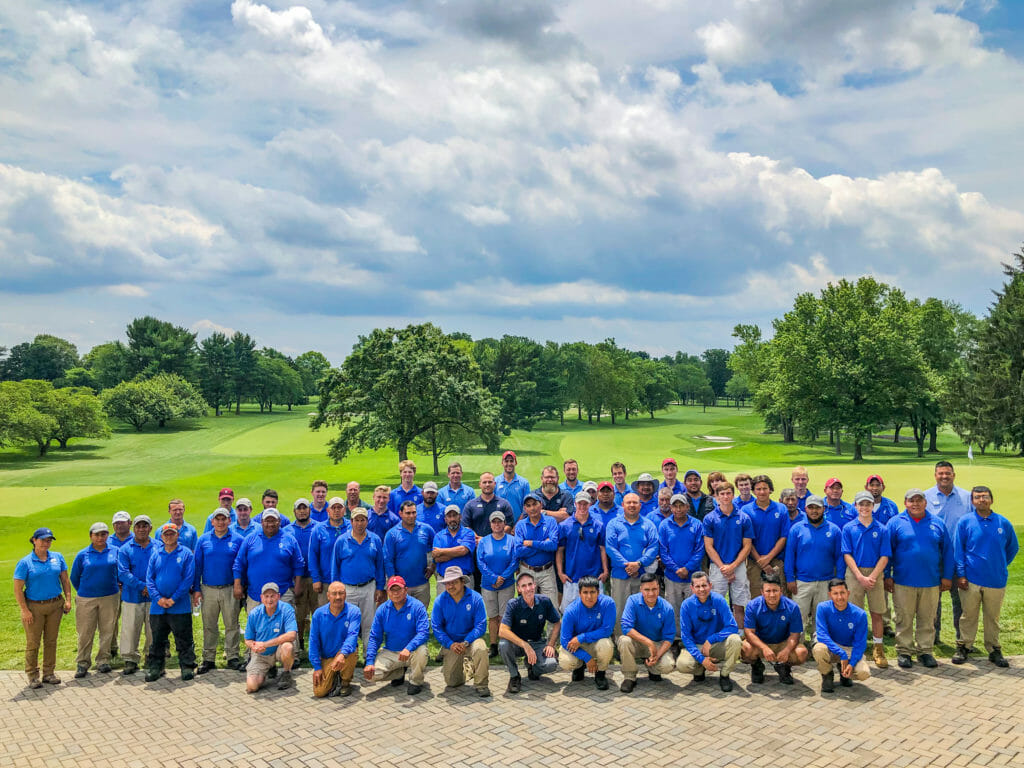 Chris Cooke, South Course Assistant Superintendent
Recently graduated from Penn State in May and has been in the golf industry for five years. He leaped at the opportunity to work on the South Course after completing internships at Merion, Oakmont and Augusta National.

Brett Snyder, North Course Superintendent
Has sixteen years of experience in the golf business and joined the team in May. During the search process, he was impressed with the designs of both golf courses and team dynamic. He is an avid outdoorsman, enjoying hikes with his Australian cattle dog, Tuesday.

Jake Shughart, North Course Assistant Superintendent
Joined the Club four months ago and has been in the golf industry for five years. He was attracted to work at the Club because of the close-knit, family like environment of the team. He enjoys playing golf and wood working.

Scott Verchick, Equipment Manager
Just celebrated thirty-one years on staff. Takes a lot of pride in reducing the carbon foot of the equipment used to maintain the landscape. Loves spending time with his family and bloodhound, Lily.

Nick Buoni, Assistant Equipment Manager
Been on the staff for over four years after expressing interest in the golf course mechanical trade while working on the grounds staff at Bidermann. Nick is married with two boys and enjoys taking his family on hikes throughout the region.

Peter Coates, Senior Horticulturist
Charged with the care of trees for the last fifteen years. He is looking forward to another stellar crop of peaches and apples for the membership to enjoy. Peter likes to hunt various game during his spare time.

Magdalena Ayon, Horticulturist
For the last thirteen years, Maggie has been responsible for the care of all landscaped areas surrounding the Clubhouse and various locations within racquets and out on the golf courses. She loves her job because of all the appreciation she receives from the membership on a regular basis. Maggie is married with an eight-year old daughter.

Jim Elliott, Agronomy Program Manager
Has been on the team since February and this is Jim’s second tour with the Club, having worked here from 1991 to 1997. He has been in the golf industry for twenty-six years. He is married with a daughter at St. Mark’s and enjoys watching and agonizing over the Philadelphia Flyers.

Ric Greback, Racquets Superintendent
Twenty-six years with the team and has seen a lot of tremendous improvements to the Club with the various renovations, beginning with the pool many, many years ago. He believes that if you are good to Club, the Club will be good to you. Ric has two boys and a daughter.

Paul Pelham, Utility Cart Fleet & Practice Tee Manager
Paul has been working at the Club for the last fifteen years. He is a graduate of the University of Delaware with a B.S. in Plant Science. In his spare time, Paul enjoys playing the guitar.