Excessive Rain is Not a Good Thing

During the month of June we received a little over twelve inches of rain. This is roughly eight inches more than the average rainfall for June.  While some may think this is a good thing, additional rain at this level causes more harm than good.  With all of this added moisture there are issues that can develop and impact the turf.  For example, when a soil becomes waterlogged for an extended period of time anaerobic conditions develop and Black Layer can form.  This can be damaging to the roots of the turf because oxygen is not available.  A reduction in rainfall creating drier conditions is necessary to eliminate this issue.  Also, needle tining or aerifying can help to get air to the roots as well as promote drying.  So far we have seen some black layer in the putting green located outside of the pro-shop.  The recent quad tine of this green will help to alleviate this problem.  We will also have to needle tine it frequently in order to get sufficient air to the roots.

Another issue that can arise is the development of non infectious molds due to the excess moisture.  These molds are generally not harmful to the turf, but they can be unsightly.  We have seen these molds develop in small areas on the putting green at the practice facility and also on the grass tennis courts. Once again a reduction in rainfall and drier conditions are the best cure for these molds.  We will also apply a fungicide that has shown success at controlling these molds.

Wet wilt is another problem that can develop when there are waterlogged soils in conjunction with excessive heat.  Basically what happens is roots are not able to function properly as result of reduced oxygen levels caused by the saturated soils.  As some may remember during the 2011 golf season there were significant elements of fairways lost due to excess heat and moisture around the time of the club championship.  Fortunately, we have not seen any wet wilt on either of the golf courses at this time.

The following pictures show the above mentioned issues that have been caused by all of this excessive moisture. 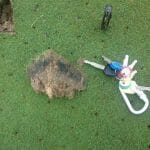 This is the back layer that has developed in the putting at the proshop. Along with the distinct black layer, it is identified by the smell of sulfur which is similar to the smell of rotten eggs. 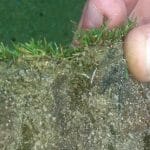 Here new roots are developing into an aerification hole created when the greens were quad tined. These holes as well as frequent needle tining will help eliminate this problem. 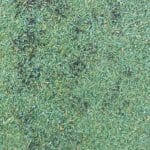 This is an example of the non infectious molds we saw on the practice facility putting green.