A Note from Grounds – September

The month of September is a marker of change for many. For some, the start of a school year provides the good fortune to boost the GPA. For sports fans, it is the dawn of a new football season, albeit, many universities are sitting out this season, the professional side will aid our pigskin enjoyment. A bonus this month, we have both US Open’s to enjoy at Flushing Meadows and Winged Foot that will surely get us excited for the fall playing seasons.

The storm of August 7th was indeed devastating. We did lose many trees, but now we have the chance to plant with the focus of allowing new trees to flourish as singular specimen trees in various locations as opposed to the crowded versions of themselves fighting for survival. Holes three, six, fifteen and sixteen of the South suffered the most in terms of tree loss. However, now with careful implementation of trees, the turf canopy will flourish beneath the trees. The golf courses will be better from all standpoints. Previously, trees blocked sunlight to various playing surfaces. Wind direction will now be a factor of consideration for a wide array of golf shots. 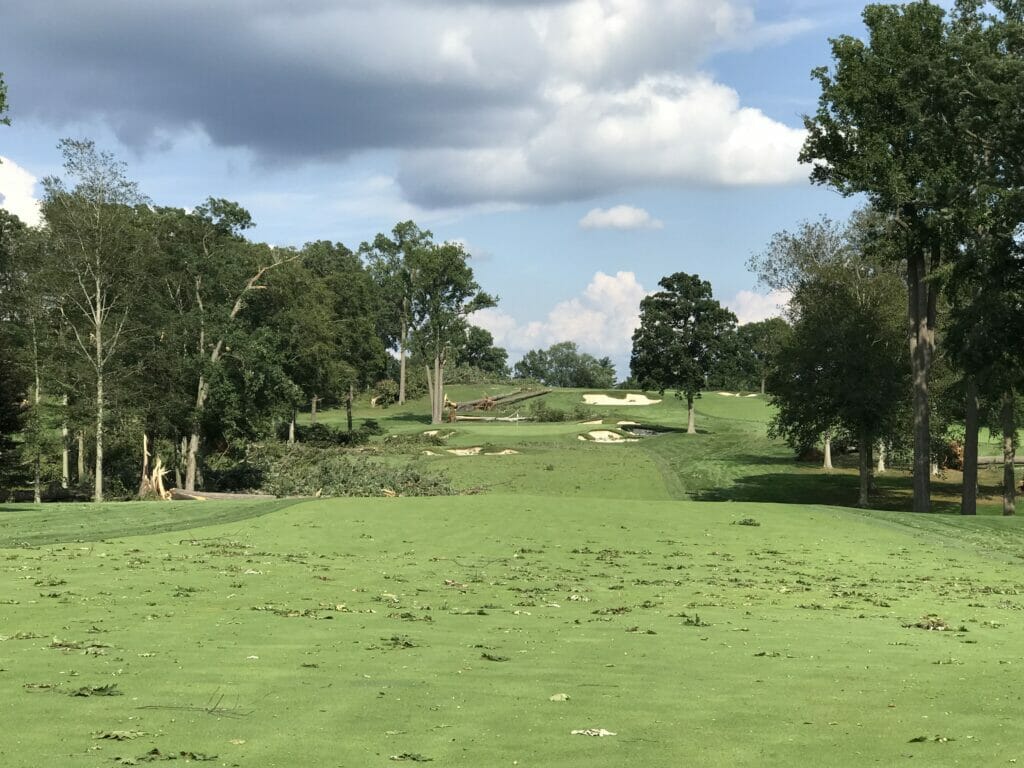 Luck was shining down on all us on August 7th. Most importantly, there was no injuries, and to the best of our knowledge, no loss of life. The luck provided by the storm is now we have the opportunity to rehab the bunkers on both golf courses.

The North Course will get a small facelift to all the bunkers to include erosion control, drainage and sand. For this project, we have chosen Valley Forge Buff (VFB) bunker sand. It is widely used throughout the region and will set up similarly to the sand currently in the South Course bunkers. A smattering of the clubs using VFB include Aronimink Golf Club, Baltusrol Golf Club, Liberty National Golf Club, Philadelphia Cricket Club and Saucon Valley Country Club.

George Ley & Company (GELCO) from Glenmore, Pennsylvania will be the contractor in charge of removing contaminated materials from the North Course bunkers. GELCO’s most recent projects include the renovation at Philadelphia Country Club and construction of the practice facility at DuPont Country Club.

We are expecting the North Course bunker project to last five to six weeks, with good working conditions. We and GELCO will do our best to minimize disruptions to your golf round, but this is inevitable. We will likely start play on either the first or tenth hole depending upon working being conducted. We are hoping to allow the contractor some time in the early morning hours to work areas that will hopefully lead to less inconveniences for your golf round. Once a bunker has been repaired and sand installed, we will place bunker rakes back out on that particular hole and the bunker will be open for normal play. We will also inform you of this via an email or ForeTees push notification. 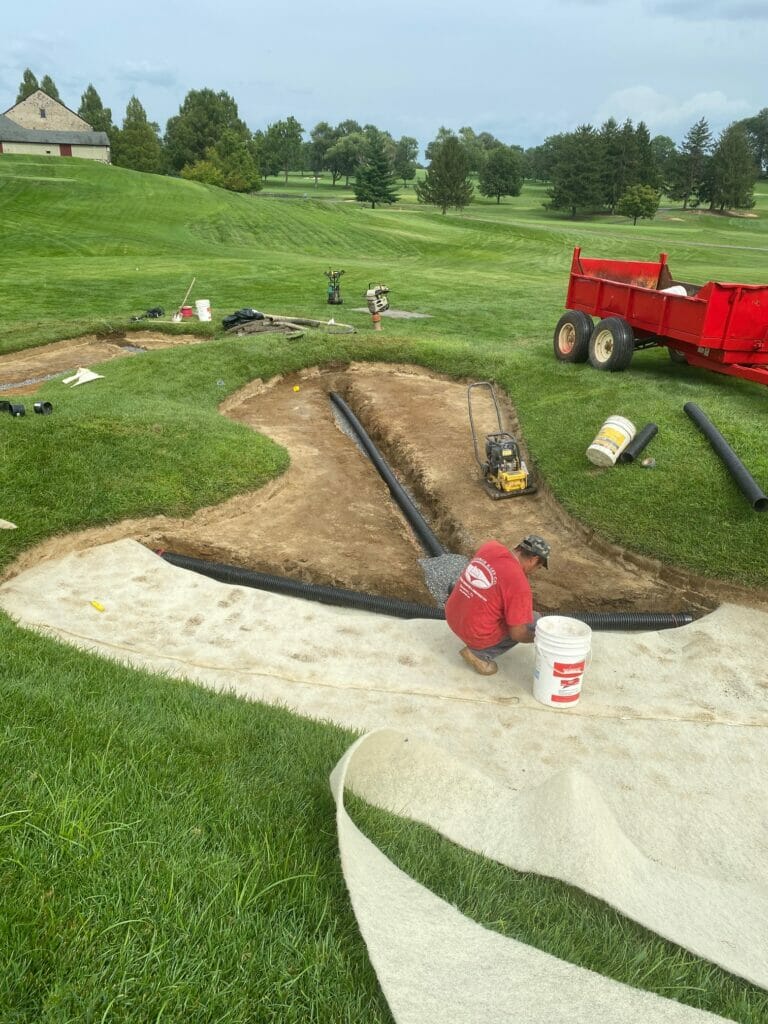 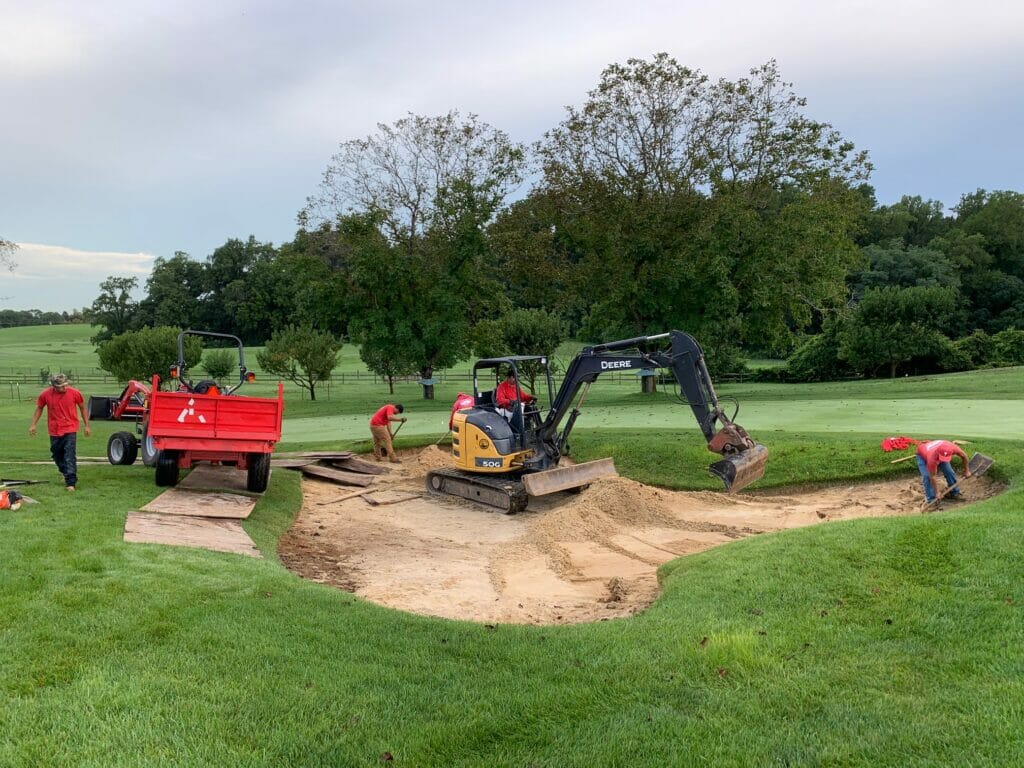 We are currently accepting bids from national golf construction companies for the South Course bunker rehab project. The work associated with the South Course bunkers includes employing the current technologies of bunker erosion materials, such as Capillary Concrete or Better Billy Bunker. Once all the bids have been returned and then awarded, we would expect work to commence on the South near the middle of the month.

While the South Course is closed, we are taking advantage of the time and conducting our aerification practices. First up will be the sand injection process known as DryJect on the greens and approaches. This will be followed by traditional coring of greens, tees and fairways. Depending upon healing and test data, we may return to the South for our regular scheduled maintenance in November for additional aeration practices. At this time, no major coring will occur on the North Course in October. However, if the need arises, we may use exceptional small tines to allow the greens to breathe to survive the winter months and push through to our spring 2021 aeration.

During the month, we expect to finish out the tennis project with only trees to plant near 10 North this fall. Planting trees will not negate the ability to obtain the needing certificates of occupancies, but tree planting will be delayed until the time is appropriate to transplant trees from our nursery stock.