A Note from Grounds – October

As we have moved on from the tornado in August, the rehabilitation project of the North Course bunkers has progressed well, as seen in the various pictures associated with this note. If your golf ball by chance has come to rest in a bunker, we hope the condition of the sand under foot is similar to the test data we used to arrive at our decision to install Valley Forge Buff bunker sand.

When choosing sands for golf, there are two choices, natural and manufactured. Natural sands are usually mined from areas such as river beds or cranberry bogs, while manufactured sands are crushed stone. The testing data mentioned above includes many parameters such as angularity/ sphericity (shape of sand granule), infiltration rate, uniformity coefficient and penetrometer reading. Of these parameters, we hone in on the angularity of the sand particle and the penetrometer test result.

Natural sands tend to have a round particulate, resulting in less compaction, leading to softer conditions that are likely to produce fried egg lies. Manufactured sands are crushed at the quarry resulting in sand particles that are angular. The more angles on sand particles, the better the medium will compact. More compaction leads to firmer conditions and lessens the likelihood of fried egg lies in the bunkers.

The USGA specifications for bunker sand selection recommends to use a sand with a penetrometer reading of more than 2.4 kg/cm² to avoid fried egg lies. We looked at a several bunker sands when the decision was made to rehab the North Bunkers. All but one had readings less than 2.9 kg/cm². Valley Forge Buff, manufactured in Honey Brook, Pennsylvania has reading of 3.2 kg/cm². As the sand has time to “weather,” this test information will correlate to the playing condition of the bunkers. For comparison, the sand previously used in the North bunkers tested at 2.5 kg/cm². For further comparison, the sand on the South Course is Pro Angle, manufactured in Sidley, Ohio and it’s penetrometer value is 4.5 kg/cm². In the end, we have significantly upgraded the sand on the North for the coming years.

During the middle of September, the golf course construction firm McDonald and Sons of Jessup, Maryland began to repair the storm damage to the South Course bunkers. This is a very exciting project as the bunkers will be shaped to their original size from the 2007 renovation. More so, we will be utilizing the latest in erosion and drainage technology for the construction of the bunker floors. A majority of the bunkering had lost their shape as the turf has grown in, making the bunker considerably smaller than their constructed shapes. This will spice of the bunker edges, flashing more sand as you look down at each golf hole from the tee or fairway.

The drainage and erosion protection we will be incorporating is called Capillary Concrete (Cap Con). There are many advantages to using this system over the carpet-like material that was in the South Bunkers. In 2007, the erosion blanket (soft liners) utilized in the construction project was the best material available and widely used throughout the golf industry. Hard liners, such as Capillary Concrete or Better Billy Bunker, were in their infancy and not extensively tested. Fast forward to now and hard liners are used at the best clubs throughout the world.

What makes Capillary Concrete unique is the base is unaffected by frozen conditions where as other hard liners tend to heave and break, resulting in stones migrating through the sand to the surface. Cap Con is far superior to other hard liners during the installation process because Capillary Concrete can be poured at any time of the year. For soft liners, we have seen first-hand the frost heave popping staples through the sand, becoming a maintenance nightmare and worse, could lead to injury if left unattended.

Capillary Concrete will drain water at a rate of 100 inches per hour. This means we should never have any standing water in our bunkers, and they will remain playable under any conditions. More so, the lifespan of the Capillary Concrete will outlast the bunker itself, meaning we could change out the top inch of Pro Angle sand in a decade, and the Cap Con would perform just as well as the day it was installed.

As we begin October, we are looking forward to putting the final touches to landscaping, hardscaping and grassing to the tennis improvement project. We see the finish line in-sight and it appears to be about two weeks to our goal. Thanks for your patience and have a great month! 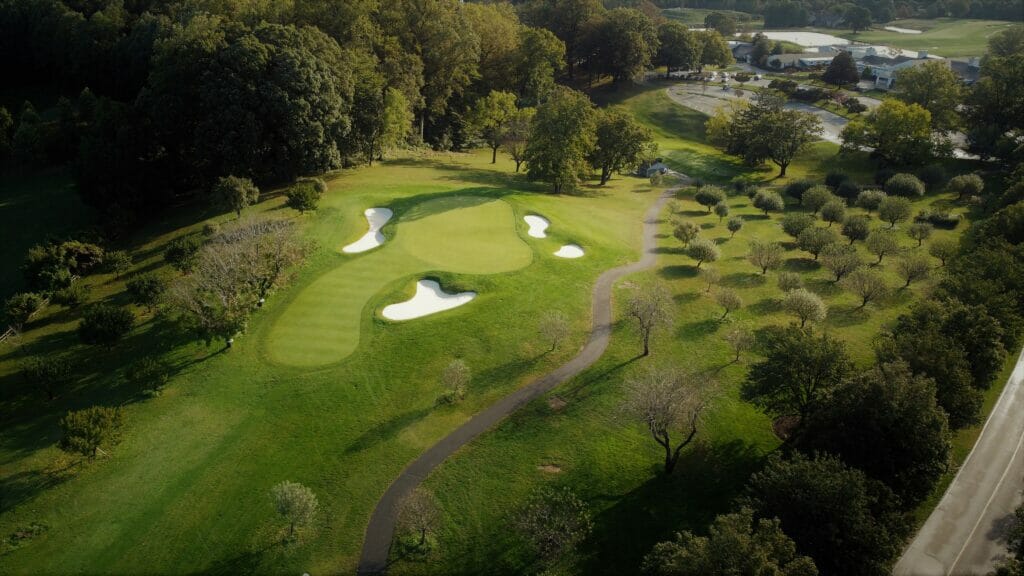 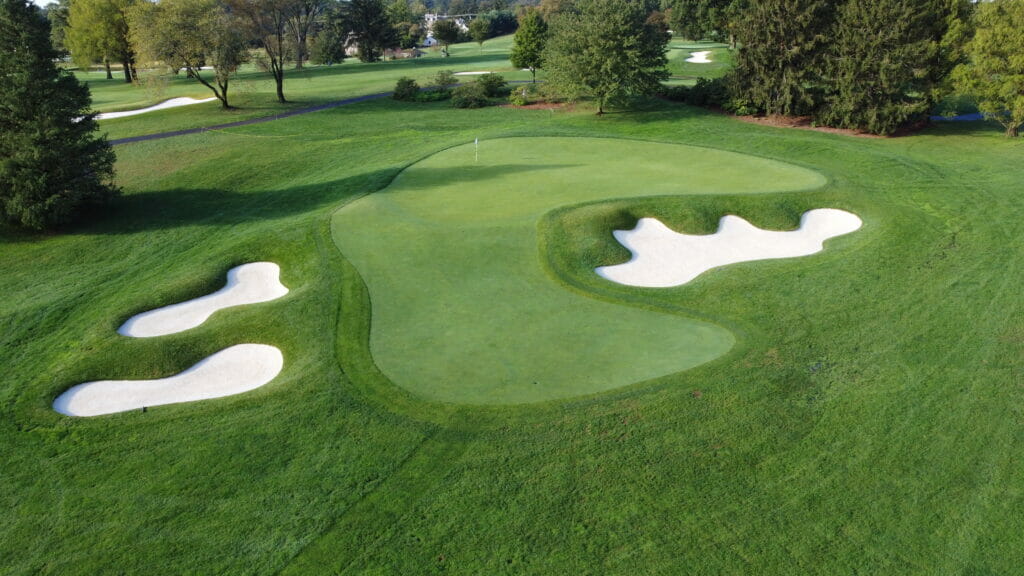 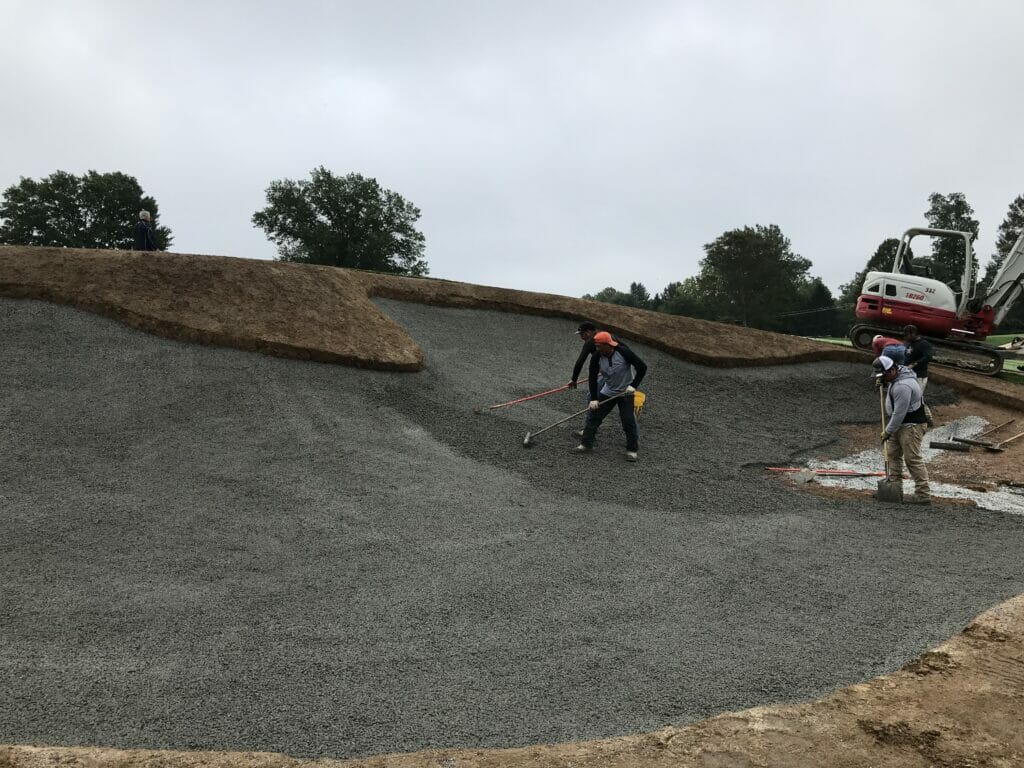 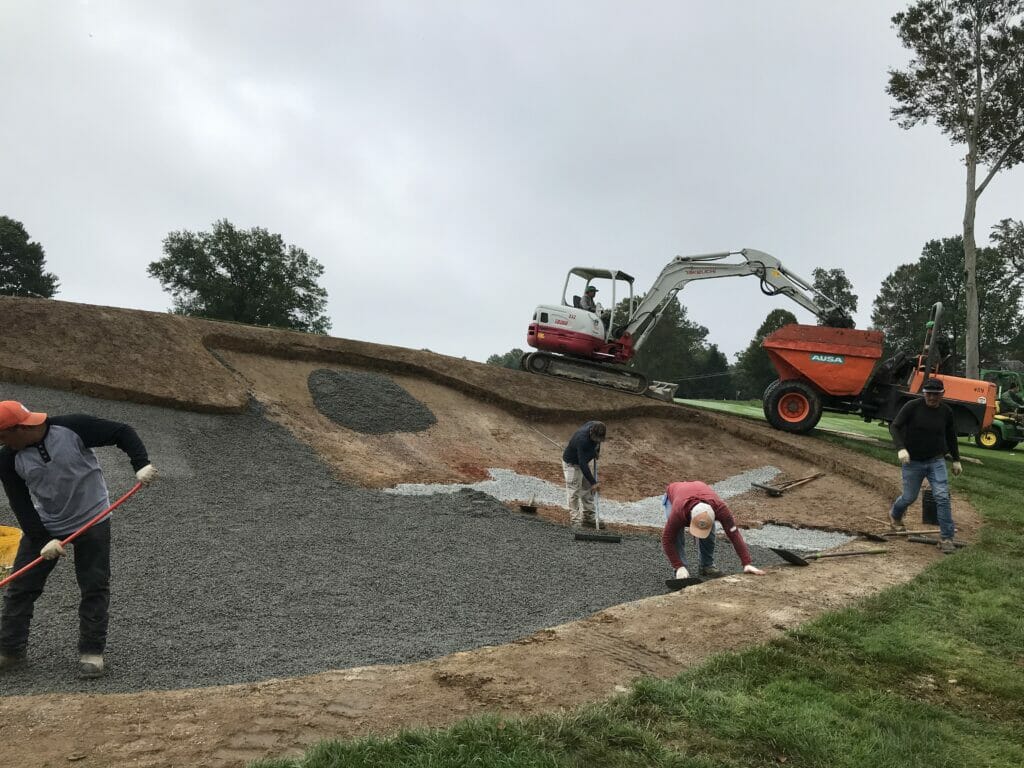 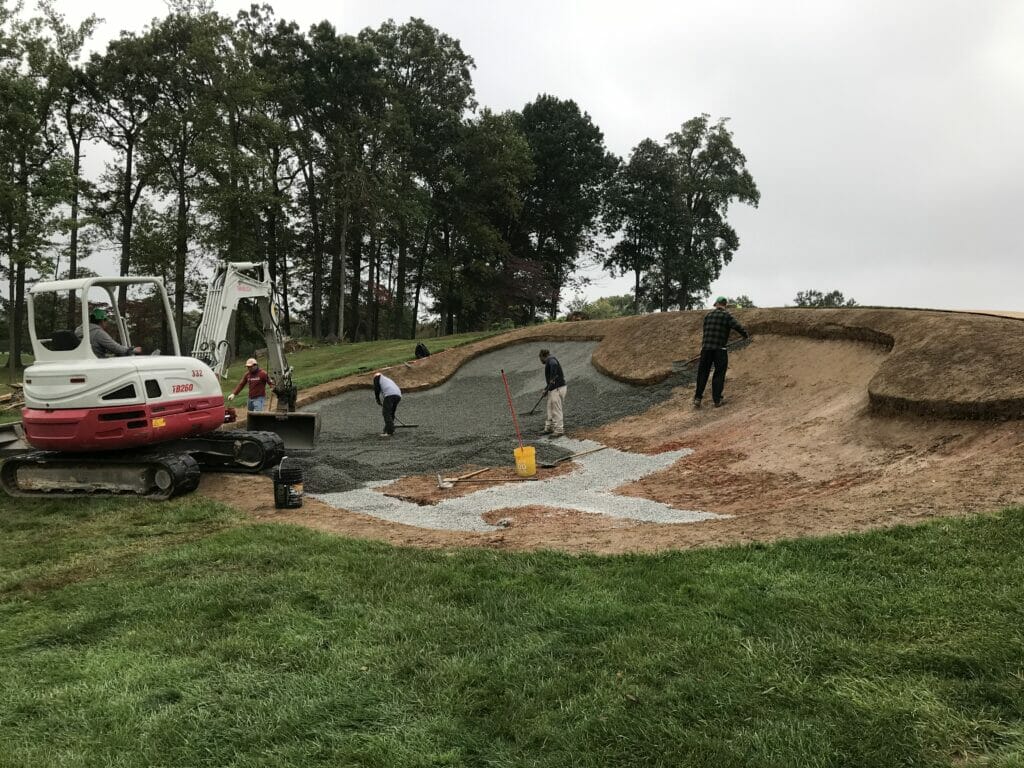 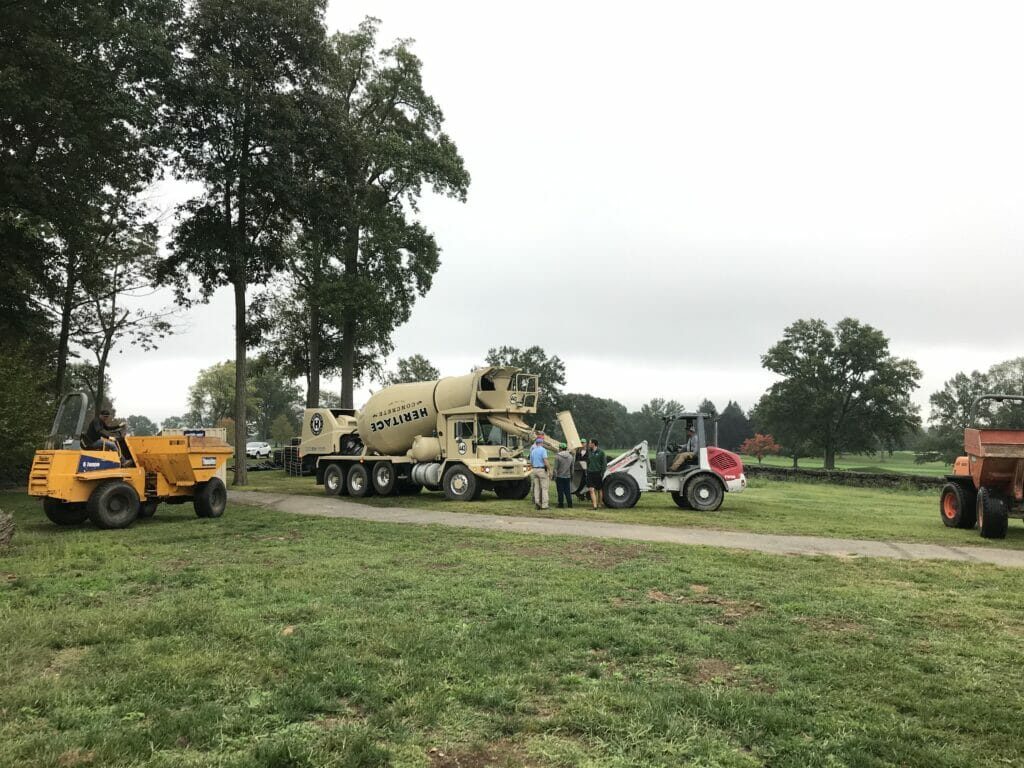 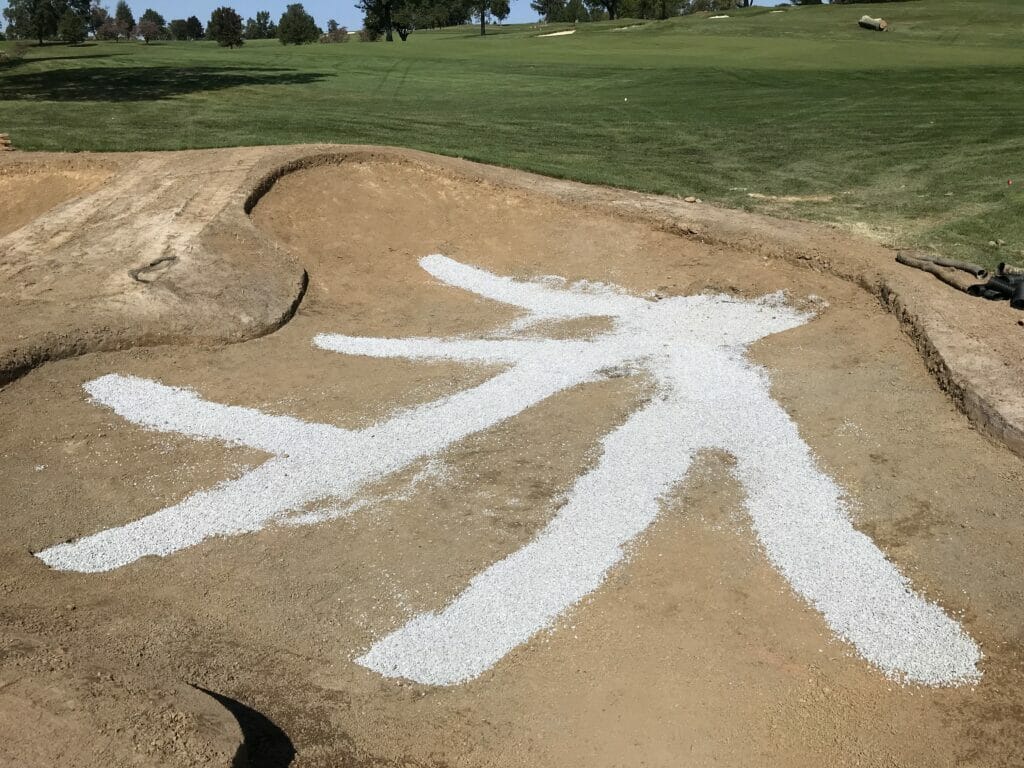 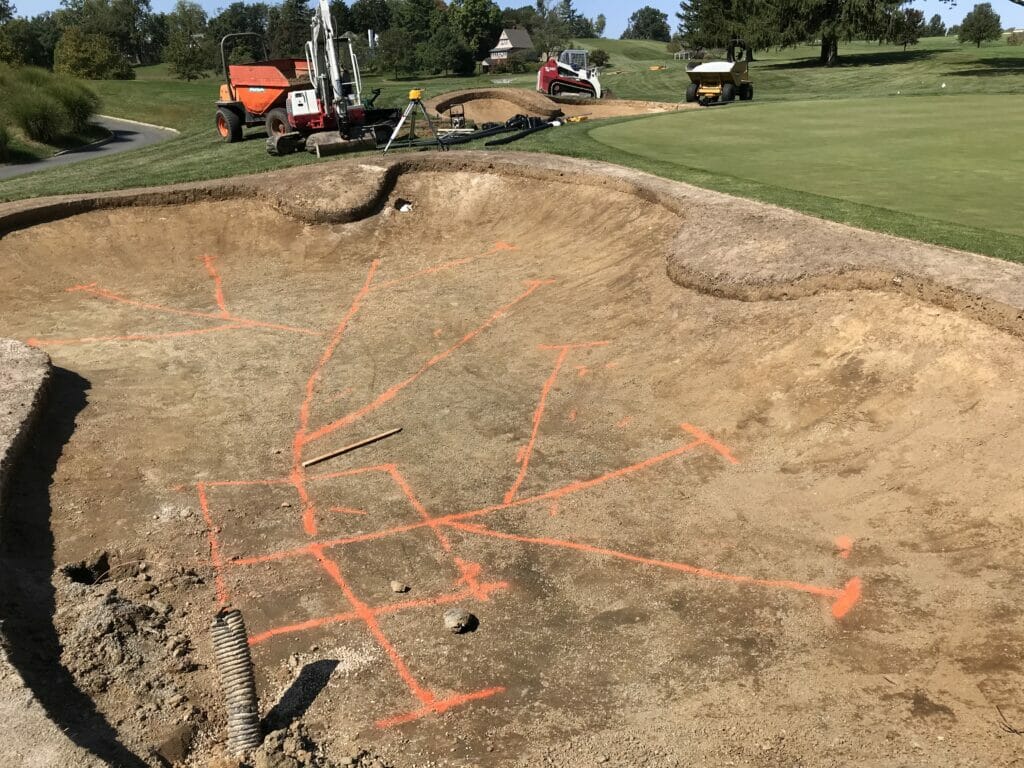