A Note from Grounds – December

A NOTE FROM GROUNDS

If you have played the North Course over the last month, you have seen the changes being made to the 14th hole of the South Course. Loads, upon loads of dirt have been moved at the new green and fairway bunker complex. By mid-November, the new green was sodded using the turf from the old green. Our architect and construction company, Andrew Green and McDonald & Sons, respectively, used GPS technology to replicate the 14th green in it’s new location (figure 1 and 2). It may appear the old green looks larger than the newly sodded green. We assure you it is the same size; exposed soil always makes an area larger than it is in reality. All the contours were copied from the old green surface with exception to the upper right side of the green. This area on the old green did not allow for many hole locations (figure 3) for green speeds we strive to achieve. A huge benefit to the construction is we have now gained a significant amount of green space for hole locations in this section of the new green.

The new green has been built to USGA specifications with a sand/soil mixture that, in-time, will play like all the other native push-up greens on the South Course.  Currently, the other USGA greens we have on property are located in the short-game practice area, the first and seventh greens of the North Course, and the main putting green at the rear of the Clubhouse.

A USGA green comprises of a drainage system below an excavated area, known as the greens cavity. A four-inch gravel layer reside at the soil level, with twelve inches of mix for the rootzone (see figures 4, 5, 6). For this build-out, we used approximately 195 tons of gravel and 500 tons of mix to fill the cavity.

As the new green site continues to take shape, work began on the existing fourteenth green complex to remove the green pad and greenside bunkering. The demolition work was similar to an archeological dig as the old green revealed what has occurred agronomically on the South greens over the last 60 years, as well as, the original construction method (figure 7). As the soil was removed on the old green, different topdressing methods can be seen

with vertical lines of sand. The greens were built with a four-inch layer of pea gravel and orange sand, then topsoil was added to a depth of twelve inches (figure 8). In 60 years, greens construction has evolved to speed the evapotranspiration rate for green firmness using drainage pipes and a medium more conducive for increased rooting of the turf.

December brings a few operational changes to our daily routine. We will cut two hole locations on all North Course greens to help spread wear patterns during the winter months. In the past, we have asked you to move the flagstick to the opposite hole location. However, due to the on-going pandemic, we want all players to not touch the flagstick. Our staff will routinely move the flagsticks throughout the winter months. Lastly, we will remove all remaining course equipment such as benches and bunker rakes.

On behalf of our team in the Grounds Department, we wish you and your families a happy and joyous holiday season! 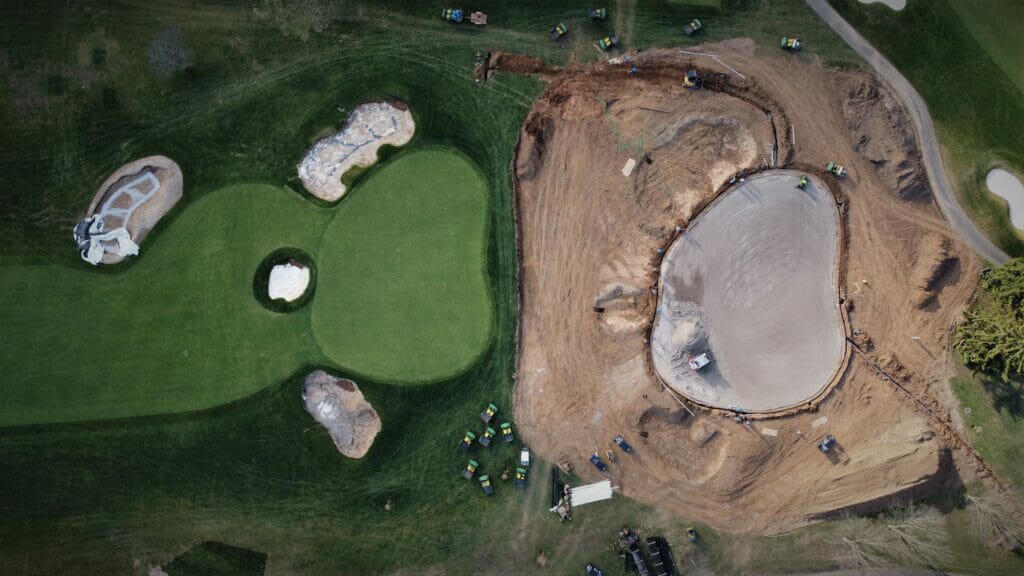 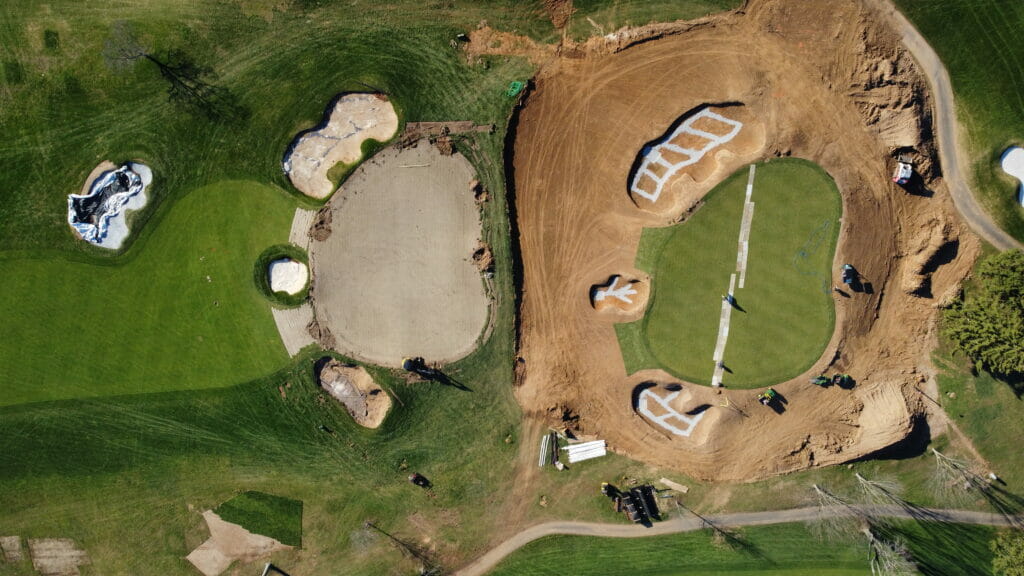 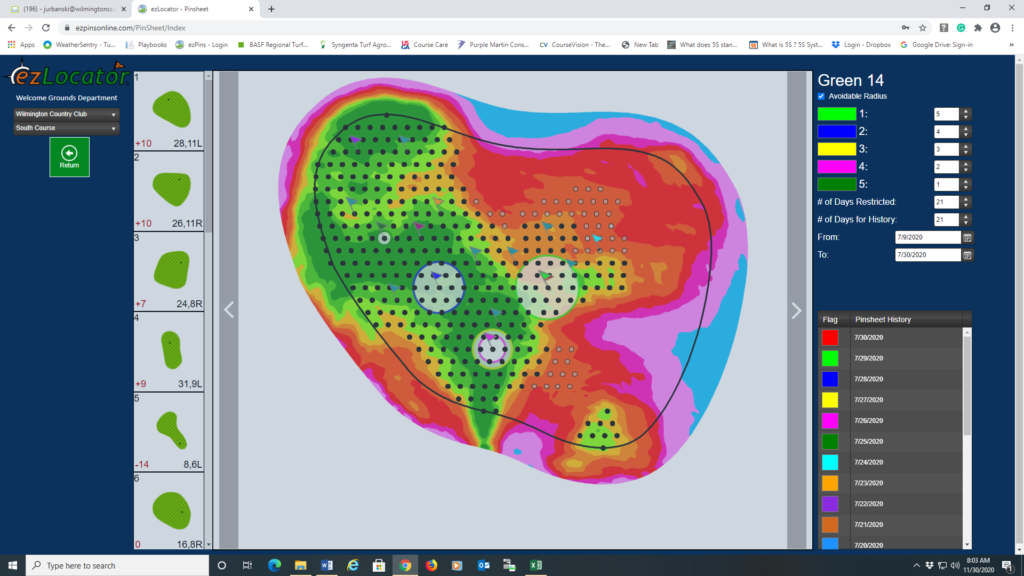 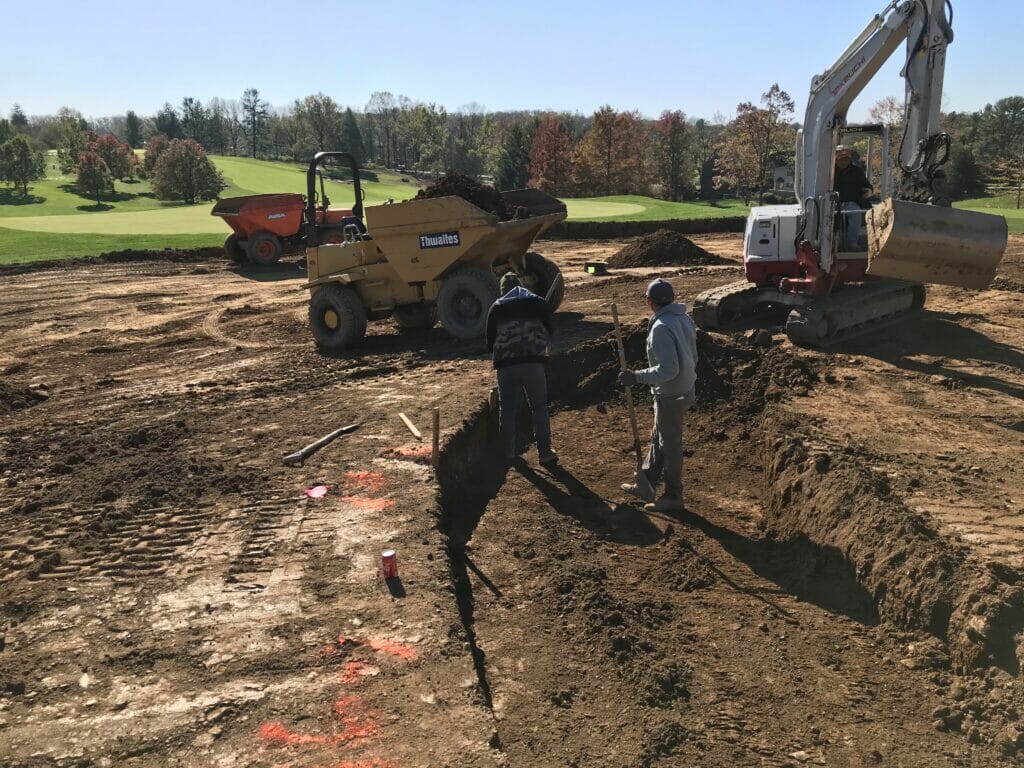 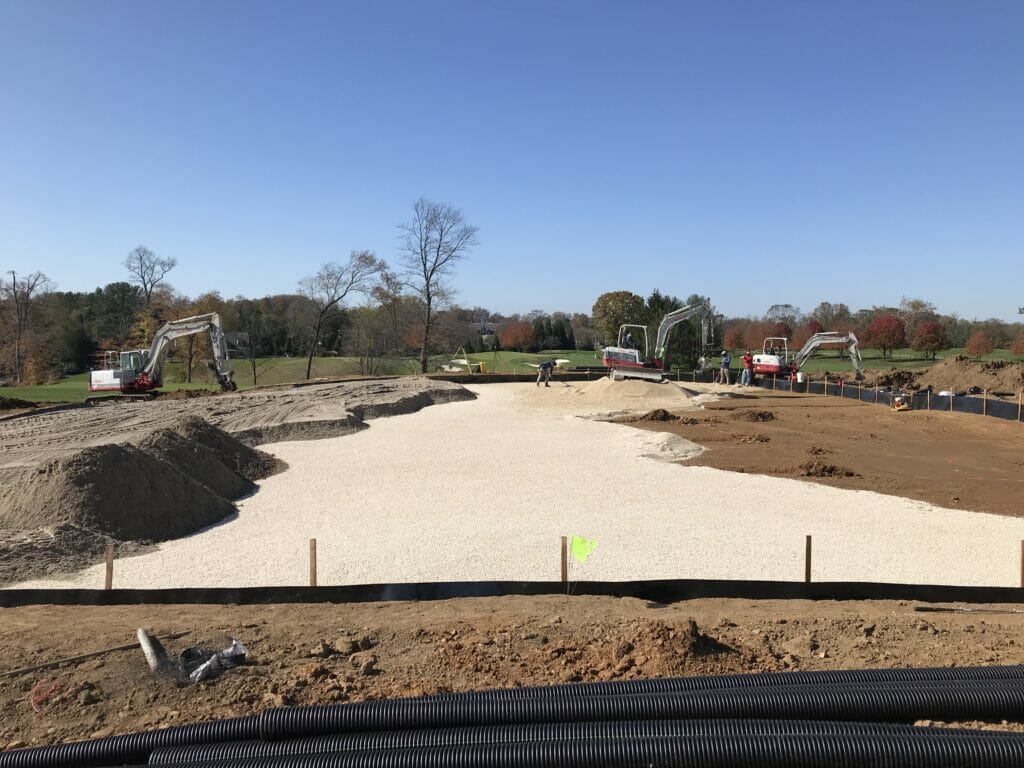 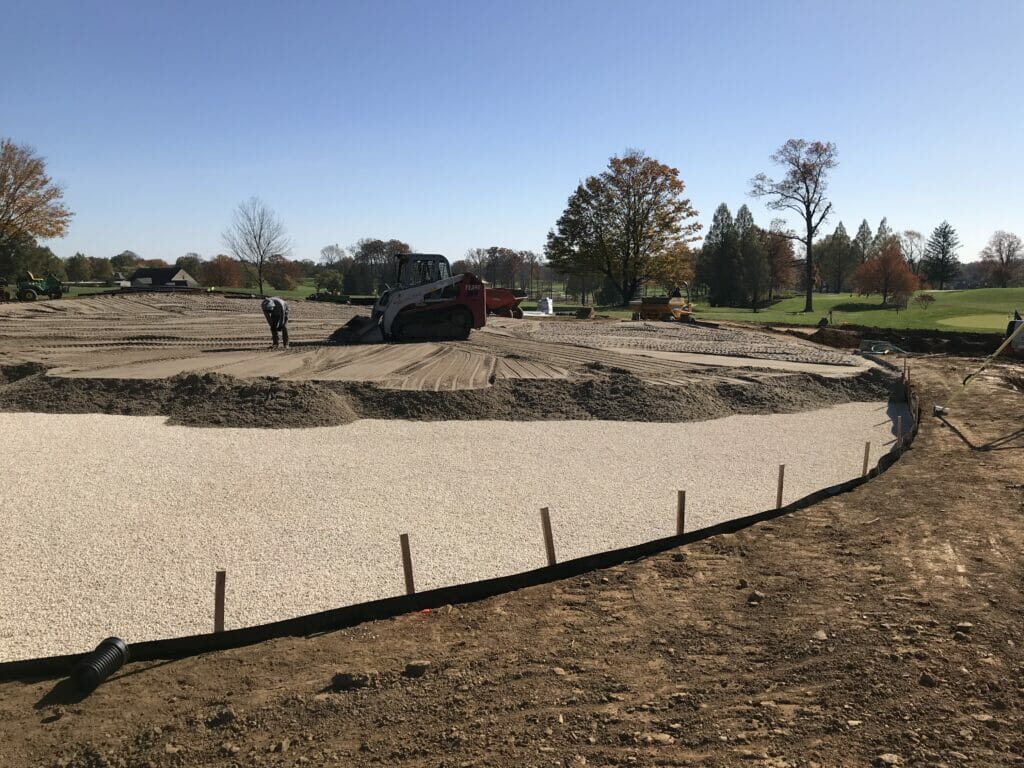 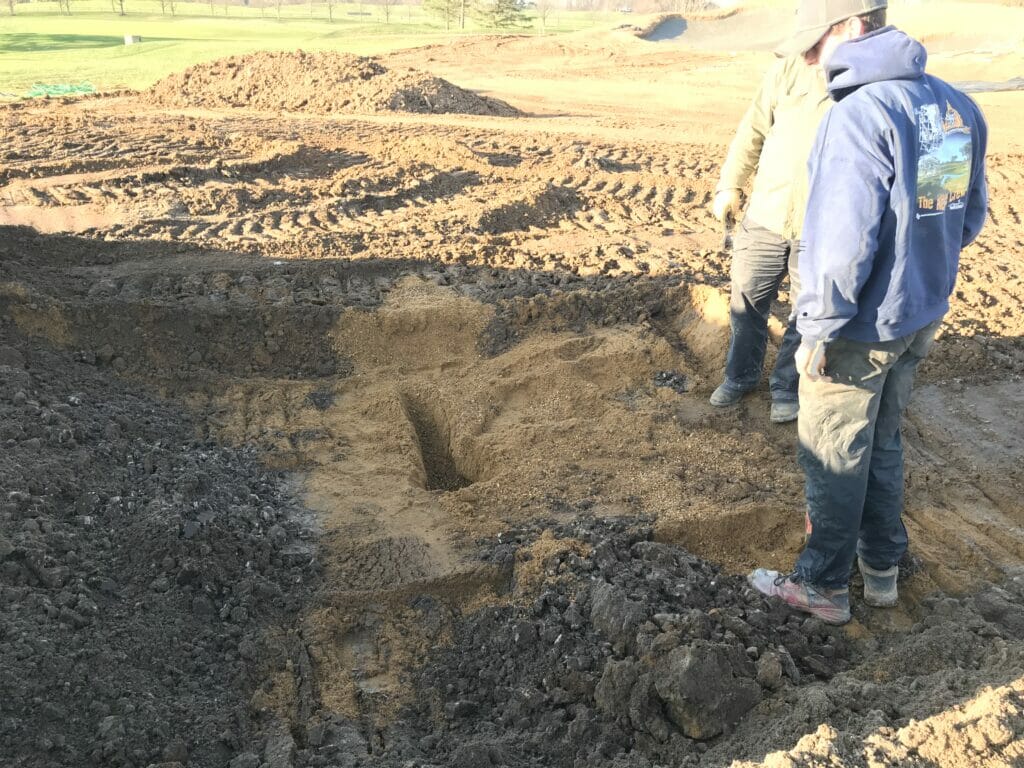 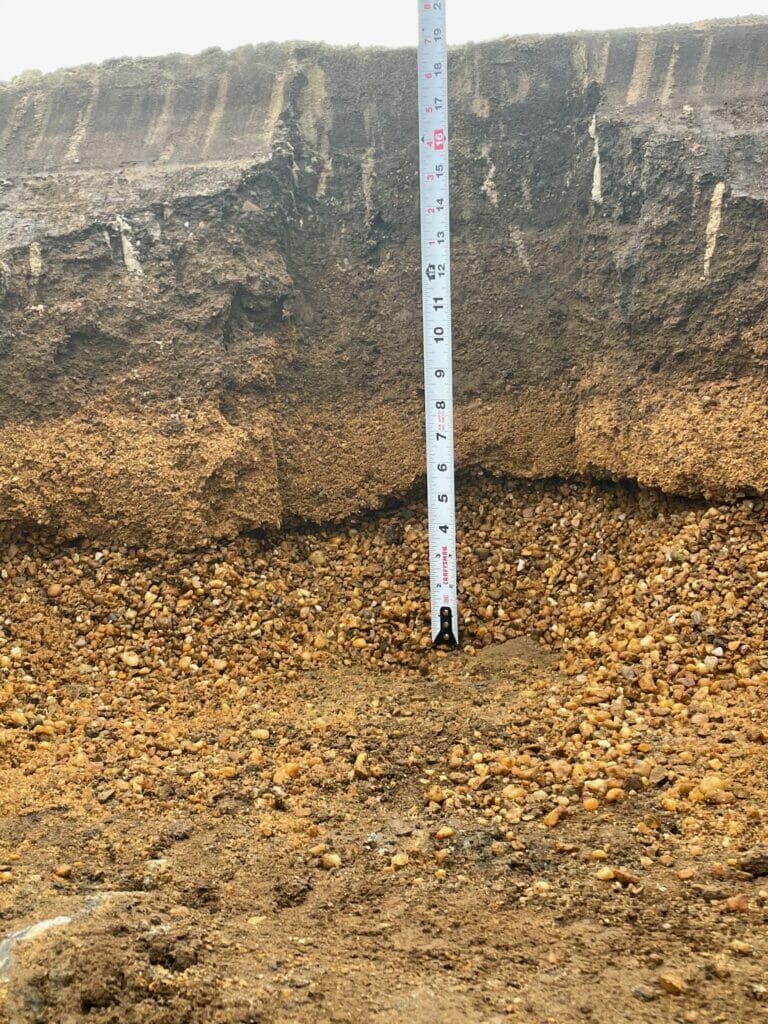